Lindsay Lohan was a child star around the time when there were no social media to be vocal on. Every car accident, family drama, or reported DUI incident led her to be trailed by the paparazzi at every turn. The 36-year-old actress explains what she has to be “jealous” of with stars coming up today.

The Parent Trap star has been through a lot of hard times in her life being followed by the paparazzi. Maybe if social media existed during her time in Hollywood, she would have had more of a say about her own story compared to the press telling it for her. In an interview with Cosmopolitan, Lindsay Lohan shared her thoughts on social media and what makes her “jealous” of upcoming stars today.

When I first started out in the business, none of us had a say in how to control our own narrative. There were paparazzi pictures, and then people ran with it. So I think it’s really good that in this day and age, people can say who they are and who they want to be. And I admire and appreciate that. I’m a little jealous because I didn’t have that.

All of the trouble that followed Lindsay Lohan is now in the past and moving on to a brighter future. She told Cosmopolitan she takes what people say about her with “a grain of salt” with more courage to just be herself. After a few years of being away from the big screen, this former Disney star is making a comeback by teaming up with Netflix for the romantic comedy Falling for Christmas. Think of it as a holiday remake of Overboard in which a spoiled heiress suffers amnesia following a skiing accident and is under the care of a lodge owner and his daughter. Lohan told Cosmopolitan it was a no-brainer choice to work with Netflix on something family-oriented and light. Plus, she likes that she gets to do a lot of physical comedy in this one. We’ll look forward to seeing that!

Despite Falling for Christmas being a light holiday comedy, that doesn’t mean Lindsay Lohan is taking her new role lightly. For the first time in her life, she hired an acting coach to work with her. She learned through meeting with Bernard Hiller not to limit how far she wants her character to go emotionally and to explore all of the possibilities of the script. This could mean that we’ll be seeing the Freaky Friday star act in a way we have never seen before.

But, the Netflix fun is not over yet for Lindsay Lohan. She’ll be taking part in another romantic comedy for Netflix in the 2023 release Irish Wish. In this one, Lohan describes her character as a “nerdy” who, as a bridesmaid, has to watch the love of her life marry her best friend. She makes a wish for true love to come to her only to wake up as the bride-to-be. The Georgia Rule actress will actually be reuniting with her Falling for Christmas director Janeen Damian. Netflix could truly be what the New York native needs in order to be in a good place with her career and positive outlook. 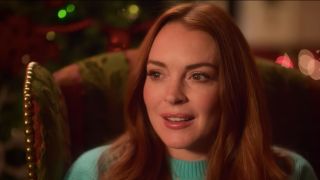 Lindsay Lohan may be “jealous” of upcoming stars today for having social media, but the Mean Girls actress makes great use of her social media power. On her Instagram account, she has a tendency of posting positivity in news about her upcoming movies, interviews, and photos of her husband and family. She seems to be happier now than ever before. Treat yourself to a holiday flick by watching Lindsay Lohan’s Falling for Christmas on your Netflix subscription on November 10th.