Matthew Perry was brought to the verge of tears while watching an old clip of himself on Friends, emaciated because of his drug addiction.

Perry, 53, has laid bare his battle with substance abuse in his upcoming memoir, Friends, Lovers, and the Big Terrible Thing, out November 1.

In the book he noted that fans could tell which drug he was on based on his physical size onscreen: ‘When I’m carrying weight, it’s alcohol; when I’m skinny, it’s pills; when I have a goatee, it’s lots of pills.’

Now in a new interview for ABC News, Diane Sawyer showed him a snippet of footage of him looking ‘painfully thin’ on a Friends episode from 1997 – the year he first plunged into Vicodin addiction while recovering from a jet ski accident.

‘It’s very hard to watch that,’ he said, barely able to get the words out: ‘because in this weird way I feel sorry for that guy, ’cause that’s a guy that’s out of control.’ 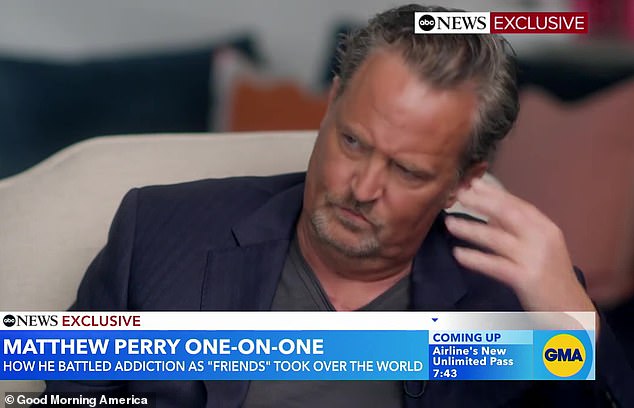 Choking up, he continued: ‘I didn’t know what was going on with me. I weighed 155lbs on my way to 128lbs. I feel too sorry for that guy, he’s going through too much – and it’s me, and I remember that, and I didn’t understand what was going on.’

He reflected that ‘I’m so grateful to not be that anymore’ but confessed that even now ‘it’s hard to, it’s hard to watch that.’

During the same interview he revealed that his Friends co-star Jennifer Aniston confronted him about his substance abuse.

Perry was surprised, thinking he had been effectively concealing his drinking from the rest of the cast, but Aniston told him they could smell the alcohol on his breath. 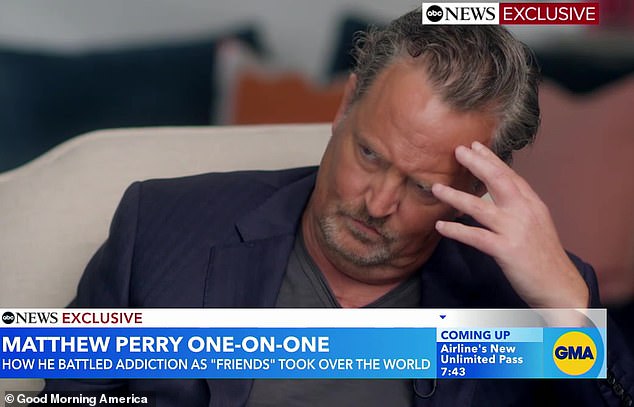 ‘But I wasn’t in a position to stop, you know?’ Perry told Sawyer in his new interview. ‘And that’s what addiction is. But she was the one that reached out the most, you know. I’m really grateful to her for that.’

‘In nature, when a penguin is injured, the other penguins group around it and prop it up until it’s better,’ he writes in a snippet of the memoir obtained by Good Morning America. ‘This is what my co-stars on Friends did for me.’

In 2004, the year Friends ended, Aniston gave Sawyer an interview in which she broke down in tears discussing Perry’s struggles with drugs and drink.

‘We didn’t know,’ she said. ‘We, you know, we weren’t equipped, we weren’t – to deal with it. You know, nobody had ever dealt with that and, you know, the idea of even losing him or….,’ she said, dabbing her eyes with a tissue.

During his latest interview with Good Morning America, Perry also reflected on his ill-fated decision to try to find love via dating app.

Last year he was one of many celebrities accused of sending cringe-worthy messages on Raya, a dating app designed for celebrities. 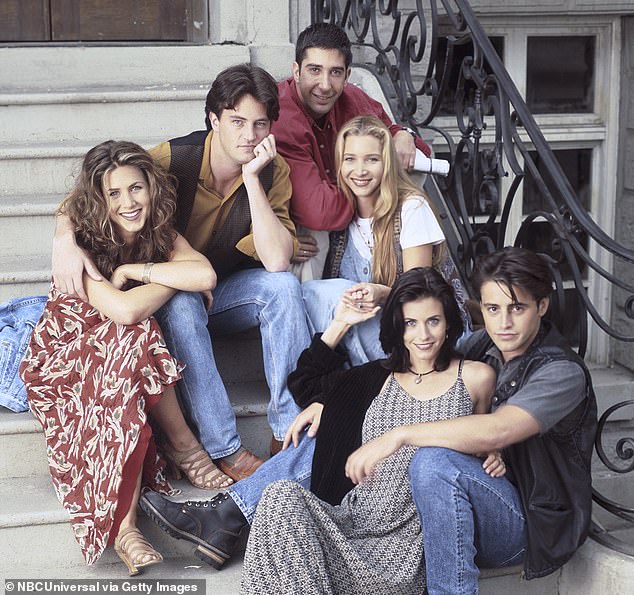 TikTok user Kate Haralson, who was 19 at the time, claimed that one of his messages to her was: ‘Am I as old as your dad?’

Now in his new interview, he said he ‘did go’ on dating apps ‘and then I rapidly stopped. It was stupid.’ The Friends star noted that ‘I would get scared and break up with them because I was afraid that if they found out those three things about me, they would break up with me, and that would annihilate me.’

In an excerpt from the book obtained by Page Six, the actor spoke out about how his addiction to opioids and alcohol affected the way he looked on screen, and revealed how those watching the NBC comedy series can figure out how severe his drug use was based off his weight and beard length.

‘You can track the trajectory for my addiction if you gauge my weight from season to season,’ he wrote in the book. 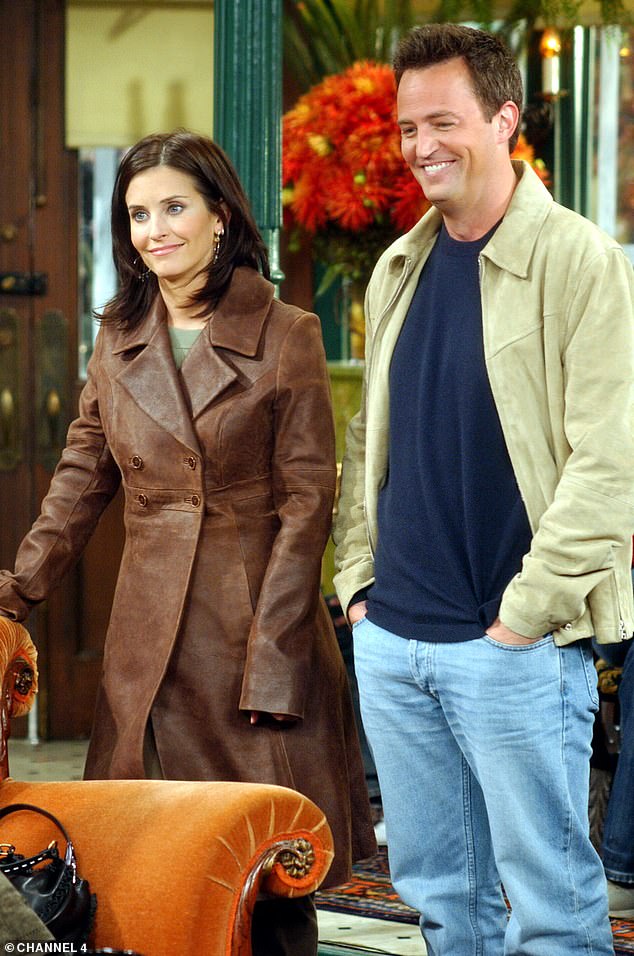 ‘When I’m carrying weight, it’s alcohol; when I’m skinny, it’s pills; when I have a goatee, it’s lots of pills.’

The actor became an international sensation practically over night after he landed the role as Chandler Bing in Friends in 1994.

But while he came off as the hilarious and heartwarming guy who always had a smile on his face on the screen, behind-the-scenes, the star was facing a downward spiral of drug addiction, alcohol use, and overdoses that left him with just a two per cent chance of survival.

Perry told People magazine recently while discussing his book that he turned to drugs to deal with the immense fame and pressure that came with starring in one of the most popular shows of all time – revealing he needed 14 surgeries on his stomach and has been in rehab 15 different times as a result of his drug and alcohol use.

In 1997, Perry got into a jet ski accident and was prescribed Vicodin, a powerful and addictive pain medication – which would eventually turn into in a years-long battle with addiction.

The comedian admitted to the outlet that during the height of his career, he was taking 55 pain killers per day and dropped down to only 128 pounds.

‘When it happens, it’s kind of like Disneyland for a while,’ he previously told the New York Times of his overnight success.

‘For me it lasted about eight months, this feeling of ‘I’ve made it, I’m thrilled, there’s no problem in the world.’

‘And then you realize that it doesn’t accomplish anything, it’s certainly not filling any holes in your life.’

He spent 28 days at a treatment center in Minnesota in 1997, but his struggles didn’t end there.

In May 2000, his battle with alcohol and drug use had become so severe that he was admitted to the hospital with pancreatitis, a potentially deadly condition that develops from heavy drinking.

And while he insisted that he ‘never drank on set,’ he told the Times that he would often come to work ‘extremely’ hungover.

‘It’s so horrible to feel that way and have to work and be funny on top of that,’ the actor said, adding that he would sometimes find himself sweating and shaking on the Friends set.

‘I didn’t know how to stop,’ he also admitted to People. ‘If the police came over to my house and said, ‘If you drink tonight, we’re going to take you to jail,’ I’d start packing.’

While he was working on the movie Serving Sara in 2001, things became so bad that Perry realized he couldn’t go on like that any longer, and he decided to take a break from filming to go back to rehab.

He stepped out of the spotlight for more than two months, before he returned to finish filming Serving Sara. 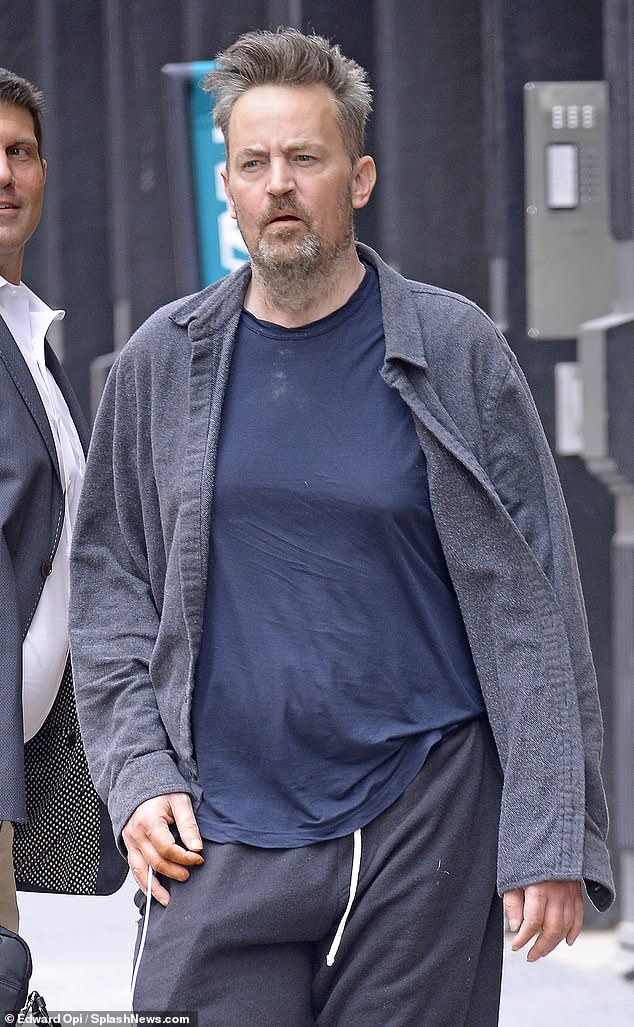 While it seemed to the public that Perry’s battles with addiction ended after that, he secretly almost lost his life a few years ago, at age 49, when his colon burst due to opioid overuse.

He spent two weeks in a coma and five months in the hospital, and had to use a colostomy bag for nine months.

‘The doctors told my family that I had a two per cent chance to live. I was put on a thing called an ECMO machine, which does all the breathing for your heart and your lungs. And that’s called a Hail Mary. No one survives that,’ he explained to People.

Now, he told the outlet that he is ‘pretty healthy,’ and that he feels he is finally ‘safe’ from going back to the ‘dark side,’ but he didn’t reveal how long he has been sober.

He added that going through the near-death experience helped open his eyes.

‘The next time you think about taking Oxycontin, just think about having a colostomy bag for the rest of your life,’ he recalled his therapist telling him, adding, ‘A little window opened and I crawled through it and I no longer want Oxycontin anymore.

‘There were five people put on an ECMO machine that night and the other four died and I survived. So the big question is why? Why was I the one? There has to be some kind of reason.’